The weather in the Amazon Rainforest

The Amazon Rainforest received its name for a reason. Although it will always be difficult to really predict the weather in the rainforest, it is likely going to be wet, either from rain or high humidity.

Still also the Amazon Rainforest has seasons and below I like to give you an impression of what weather you can expect during the different months of the year and times of the day.

The weather in the Ecuadorian Amazon 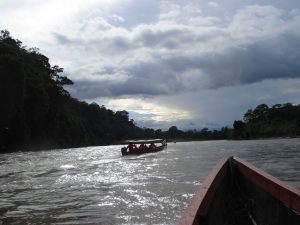 The climate in the Amazon is humid and warm year round. The temperature during the day is usually between 26 °C to 38 °C with a humidity of more than 90%. However be careful that after a bright and sunny day the temperature in the evening can drop quickly until below 20 °C. After a warm day this makes the evening feel cool. The humidity in the Amazon is something else to keep in account as it affects everything. It is recommendable to keep electronics and clothes you don’t use in sealed plastic bags to prevent them from getting humid/ wet.
The official raining season for the Amazon region in Ecuador is between November and April. However the unique geological location of the Cuyabeno Amazon Reserve actually causes December and January to be the two driest months of the year.
Because of the drought during these months it isn’t always possible to reach each location by canoe. On the positive side, more animals will be drawn to the fewer places with water. This makes spotting wildlife easier.
More information about the climate in the Ecuadorian Amazon.

The weather in the Peruvian Amazon

The climate in the Amazon Rainforest of Peru is year round humid (90%), wet and warm. The temperatures lies between 28°C and 38°C during the day, but be prepared for the nights. After a clear hot day of 38°C a temperature of 18°C in the evening/ night can feel cool.
The weather in the rainforest is always wet. But there are still differences between the raining season and the so called dry season in the Amazon. Dry season is generally from May until November. During these months the rain showers are less frequent and heavy. The temperature during the day is generally slightly lower (22°C / 30°C). Between May till August it is even possible that the temperature in the south of the Amazon reaches the low ten’s. This phenomenon is called ‘friajes’ and seems to be a good time to spot the jaguar.
During the wet season and especially between January and April, traveling to and within the Amazon can be more challenging. Heavy rains and rising rivers frequently cause roads to be temporarily impassible. Also flights to and from the Amazon region are frequently delayed. Sometimes flight are even cancelled due to heavy rain showers.

The weather in the Bolivian Amazon

The climate in the Amazon Rainforest of Bolivia is similar to this in Peru. The weather is year round warm, wet and humid with a temperature between 32°C during the day to 18°C at night. The highest temperature ever registered in Bolivia is 47°C! This was in the Chaco Amazon district east of Tarija.
During raining season the temperature is slightly warmer and there is less difference between day and night temperatures. Raining season is worst during the months December, January, February and March. During these months traveling to and within the Amazon region is much more challenging.