Waorani fight to protect the Amazon Rainforest and their culture

In 2019 the Waorani gained justice in their first legal fight to protect their Amazon Rainforest. In July the Ecuadorian Court of Justice confirmed an earlier ruling that vetoes oil companies in Waorani territory. This rare court decision gives hope to the Waorani and other indigenous cultures who live in the rainforest.

Who are the Waorani? 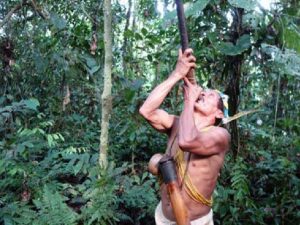 The Waorani, Huaorani in Spanish, or Waodani in local language are Native Americans from the Amazonian Region of Ecuador. The Waorani comprise almost 4,800 inhabitants and speak their own language. Waodani is an isolate linguistic that is not known to be related to any other language.
Traditionally the Waorani live within and from the Amazon Rainforest. The forest, flora, fauna and rivers are woven into their life and culture. They have remarkably detailed knowledge of its geography and ecology. The main daily activities of the Waorani consist of hunting, fishing and gathering. While hunting supplies the major part of a Waorani diet it is also of cultural significance. To the Waorani who live in close harmony with nature, each life is considered sacred. Therefore the Waorani will only kill for food after asking for permission from the forest spirits.

In the last 50 years, the Waorani have shifted from a hunting and gathering society to live mostly in permanent forest settlements. However at least five groups have decided to avoid all contact with the outside world. They continue to move into more isolated areas of the Amazon Rainforest. These indigenous groups include the Tagaeri, the Huiñatare, the Oñamenane, and two groups of the Taromenane. .

The Waorani ancestral lands are roughly located between the Curaray and Napo rivers, about 80 km south of El Coca. In 1990, the Waorani were granted the rights to the Waorani Ethnic Reserve 6,125.60 km2. This territory is about 190 km wide and 140 km from north to south, covering part of the Napo, Orellana, and Pastaza Provinces.

The protected status of Yasuní National Park, which overlaps with the Waorani reserve, also provides some measure of environmental protection. Additionally, the government has created a protected zone inside of Yasuni. This intangible area serves to avoid contact with the Tagaeri and Taromenane. However, much of their land is still illegally logged as big and small corporations continue to extract natural resources. These activities force the Waorani onto smaller and smaller parcels.

Waorani protecting their rights and lives

On Thursday July 11 the Ecuadorian Court of Justice reconfirmed a ruling in favor of the Waorani. This ruling prevents the petroleum companies from entering “Bloque 22”. Block 22 consists of around 180,000 hectares within the Yasuni Reserve and Waorani territory and the government wants to sell it to petroleum companies.
The lawsuit to deny access to petroleum companies was filed in April. It is a legal battle between the Waorani and the Ministry of the Environment, the Attorney General of the State and Non-Renewable Natural Resources portfolios. It sounds a bit like the battle between David and Goliat.

The Waorani argued that there was a violation of the constitutional right to self-determination of peoples. They also argued that a previous consultation in 2012 had been deceiving. They had been bribed with gifts and limited information about the actual exploitation plans on their lands.

The Waorani own some 800,000 hectares of jungle in the provinces of Pastaza, Napo and Orellana, a part of the Ecuadorian Amazon basin. The law recognizes the indigenous jurisdiction, but maintains the power of the State over the subsoil.

The Ecuadorian Environmental and Energy Department appealed the court decision. They argued that they obtained permission from the Waorani communities thanks to the consultation made in 2012.
However, the Waorani claim that this wasn’t a consultation. It was more a short  exchange of food and refreshments for signatures. The Waorani wasn’t properly informed about the extraction plans.

Justice for the Waorani communities

A new court room was installed on July 1 in the town of Puyo, capital of Pastaza, to hear the appeal. By rejecting the appeal, this court upheld the court ruling issued by the lower court in Pastaza last April.
As a measure of reparation, the court ordered that the State conduct a new consultation.

As a result of the demand, the Ministry of Energy and Non-Renewable Natural Resources wrote: “Block 22 is currently not in projects to be tendered”.

The future of the Waorani and the Amazon Rainforest

As written above, the Ecuadorian State unfortunately only considers the court’s decision to be temporarily. But at least this historical decision has triggered hope within other indigenous communities. Many indigenous communities living in the Amazon Rainforest have shown their dissatisfaction about oil companies entering their territories. They fear, and with reason, for contamination of the rivers, the rainforest and their lives.

Now it is important that all these communities keep united and keep fighting for their rights to protect the rainforest and their lives.
If you want to help the indigenous people of Ecuador and the Amazon Rainforest you can have a look at the following two websites:

Here you can sign the petition that helps the Waorani to protect their land and our lungs of the world #ResistenciaWaorani
Do you want to help by providing clean drinking water in parts of the Amazon Rainforest that were contaminated, the check-out Amazon Frontlines.

Part of this story is based on an article in the Ecuadorian newspaper El Universo.

Check out our Amazon Rainforest tours in Ecuador and exclusive tour into the Waorani territory!