Information about the Amazon Rainforest in Bolivia

Although each time you visit the Bolivian Rainforest will be a different experience, with the information below we still like to give you a good impression about what you can see and might encounter while exploring the rainforest of Bolivia. 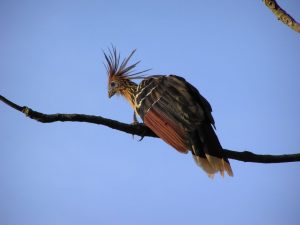 The PN (Parque Nacional) Madidi was created in 1995. The Madidi Amazon Reserve is located in the Northwest region of the Department of La Paz, in the provinces Franz Tamayo, Iturralde and Abel Bautista Saavedra and can be reached from Rurrenabaque if you cross the Beni River with the small passenger ferry over to San Buenaventura.

The Madidi Amazon Reserve covers 18,957.5 km2 (1,895,740 ha) and forms part of the international corridor of protected areas that extends from Vilcabamba (in Peru) to Amboro (in Bolivia), including Manu Biosphere Reserve, Tambopata-Candamo Reserve, Bahuaja-Stonene National Park y Manuripi-Heath, Apolobamba. All together this forms one of the largest protected areas and most biologically diverse regions in the world.
The Madidi nature reserve ranges from the Amazonian lowlands of the rivers Heath and Tuichi, at 200 m altitude, to the mountains of the glacier-covered Apolobamba Range at more than 6,000 m altitude. Madidis vast wilderness has a variety of ecosystems and encompasses unparalleled biodiversity ranging from mountain cloud forest to dry tropical forest, humid lowland forest to savanna, wild rivers and lakes!

Madidis mountains, forests and river habitats are home to more than 1,000 species of neotropical birds, 5,000 – 6,000 superior plants, 44% of all new world species of mammals, and an estimated 38% of neotropical amphibians. The tropical Andes from Madidi is also a globally critical hotspot of plant endemism.

Check out our jungle tours into the Madidi Amazon Reserve!

Wildlife in the Madidi Amazon Reserve 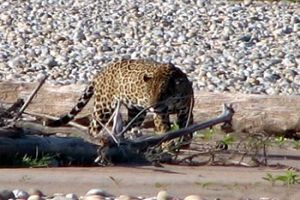 Dr. Robert Wallace, wildlife biologist, is credited for discovering an unidentified titi monkey which only lives in Madidi, a new species to science. The right to name the new species was auctioned through an agreement between the scientists, the Bolivian National Protected Area Service (SERNAP) and the Foundation for the Development of the Protected Areas (FUNDESNAP). This effort has raised 650,000U$ for a trust fund which now generates enough income to pay for 14 park guards annually. The park is also notable for its over 1,000 bird species, representing 11% of the world’s 9,000 bird species.
Equivalent there is a rich and varied life in the water with many fish species.

Note: During a survey in October 2011, done with the support of National Geographic they discovered 19 different jaguars in the Madidi Amazon Reserve!

The weather in the Madidi Amazon
The climate varies from cold in the mountain range area until warm in the lowlands of the North. The dry season coincides with the austral winter. The average annual temperature is 26 C degrees, but much depends on the altitude.
Madidi is located in the southern hemisphere and so the cold season (autumn and winter) go from May to September and the hot seasons (spring and summer) from October to the beginning of April, it’s also considered the rainy season.
Warmest month November, wettest month January.

Eco Amazon Lodges in Bolivia
There are also some eco-lodges in and around the Madidi National Park. The oldest and best known is Chalalan Ecolodge in Chalalán on the Tuichi River, a successful community-based enterprise that generates significant economic benefits to indigenous communities.
Another important site is the Serere Sanctuary operated by Madidi Travel; a 4000 hectare private reserve dedicated to generating income through real sustainable eco-tourism for on-going conservation work to establish new legally protected zones in the north of the Madidi Mosaic. Its creator Rosa Maria Ruiz is a woman who has fought for the Madidi Park and its conservation for over 20 years. She was the founder of Eco-Bolivia, an organization that was instrumental in establishing Madidi National Park in the 1990s. The Serere lodge is located three hours from Rurrenabaque by boat.
Others Amazon lodges include San Miguel del Bala Eco-Lodge on the banks of the Beni River reached by boat 40 minutes upstream from Rurrenabaque, and the young Entno Ecolodge – Mashaquipe on the Tuichi River close to the outlet into the Beni River.

After reading all the information about the Bolivian Amazon Rainforest, it is now time to check out our tours!