Information about the Amazon Rainforest in Ecuador

Although each time you visit the Ecuadorian Rainforest will be a different experience, with the information below we still like to give you a good impression about what you can see and might encounter while exploring the rainforest of Ecuador. In addition we now provide this information also in Dutch! 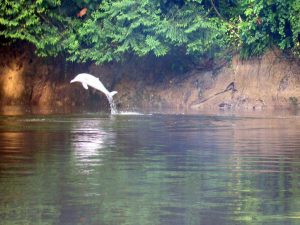 The Cuyabeno Wildlife Reserve (in Spanish: Reserva de Producción Faunística Cuyabeno) is a humid tropical rainforest reserve in Ecuador. Cuyabeno is situated in the Putumayo Canton in the Sucumbíos Province and in the Aguarico Canton in the Orellana Province and was founded on 26 July 1979.
At an altitude of 200– 280 meters, one of the principle objectives of the 6,033.8 square kilometres (2,329.7 sq mi) Cuyabeno Reserve is ongoing conservation of the complex Amazonian ecosystem. The flora and fauna from the Cuyabeno Reserve isn’t only protected by the Ecuadorian government, but also by its geographical nature and location.
The reserve holds an extensive complex of rivers, creeks, lagoons and floated forest, which makes the area difficult to work for the wood and petroleum industries.
The protected area from Cuyabeno is characterized by its high biodiversity and interaction and cooperation between the species inhabiting the area. Its geomorphology is a consequence of the rivers carrying sediment and materials from the Andes, principally by Aguarico River, which is considered as white water due to the sediment it drags.
Cuyabeno is considered to be one of the most bio diverse sites in the world together with the neighboring Yasuni National Park.
Approximately 12000 different plants have been found inside the Cuyabeno Amazon Reserve, including as palms, bromeliads, Ceibos, heliconia, Macrolobium, wild roses and 60 different orchid species. Many of these plants are still used by the native indigenous to eat, build and cure diseases. 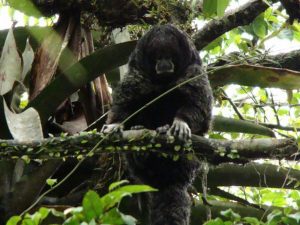 The Cuyabeno reserve is particularly known for its wildlife. Creatures like tapirs, ocelots, bats, jaguars, pumas, capybaras, anacondas, anteaters, peccaries, poison dart frogs, agoutis, iguanas and fifteen different species of monkey can be found roaming the extensive lands of the reserve. Swimming through the waters are turtles, pink freshwater dolphins, giant otters, manatees (use to be frequent, but are now very rare seen), five species of caiman and over 350 different species of fish—including the famous piranha.
And if you look into the air and search the tree-tops you can find more than 550 different bird species, which make this reserve a great place for bird watching! Keep your eyes peeled for colorful parrots, kingfishers and hoatzins, woodpeckers, hummingbirds, tanagers, macaws, toucans and even the Harpy Eagle, which flaunts its 8-foot (2.4 m)-wide wingspan!

Visitors to the Cuyabeno region will be stunned by the remoteness of it. The jungle appears as a thick, dense mass of green laced and interwoven by powerful rivers and trickling streams. Life is all around you at the Cuyabeno reserve, as you’ll notice that it’s never quiet here. You can always hear something buzzing, chirping, howling or hooting. Green is without a doubt the dominant color, but the longer you spend at the park, the more you will begin to notice the brilliant flashes of color produced by the many exotic flowers, birds and insects.
Visitors to the area should also be prepared to get wet, and not just from the torrential rains and overflowing rivers. The humidity level is typically between 90 and 100%, making for some very sticky conditions. Be sure to pack breathable clothing and plastic casing for any electronics or valuable goods.
Check our following page for more information about the different Amazon Lodges in Ecuador.

Humans in the Cuyabeno Amazon Reserve

The five different ethnic groups that still live within the reserve include: the Siona, Secoya, Cofán, Kichwas and Shuar. Each of them still has its own culture and language.

The extensive Cuyabeno water system covers the Aguarico River, the San Miguel River and the Cuyabeno River, all of them with their own tributaries.
Limited rainfall records indicate an annual mean precipitation of about 3,000 mm; with more than 250 mm of monthly rainfall during the rainy season (from mid-March through August) and less than 250 mm during the dry season (from Mid-December through the first days of March).
During raining season floods from the Cuyabeno River form 14 typical black-water lagoons, which shrink a lot during the dry season. From December to March they might even dry almost out. During this period access to the lagoons is very unreliable and sometimes only possible on foot.
However, during the dry period, the lake area is extremely beautiful and wildlife often is concentrated in great numbers around the last remaining puddles and pools in the drained lakes. Many birds have their breeding season during that period.

Check out our tours into the Cuyabeno Wildlife Reserve! 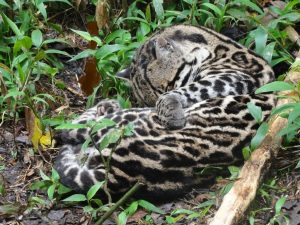 Yasuni National Park is in Ecuador and covers an area of 9,820 km2 mainly primarily rain forest between the Napo and Curaray rivers in the Napo and Pastaza provinces. Yasuni is about 250 km from Quito and was designated a UNESCO Biosphere Reserve in 1989. It is within the claimed ancestral territory of the Huaorani indigenous people. The Yasuni Amazon Reserve is also still home to several un-contacted indigenous tribes, including the Tagaeri and the Taromenane.
Yasuni is arguably the most biologically diverse spot on Earth. A single hectare in Yasuni boasts more species of trees than in all of North America!
Yasuni is at the center of a small zone where amphibian, bird, mammal, and vascular plant diversity all reach their maximum levels within the Western Hemisphere. Moreover, the park breaks world records for local-scale (less than 100 km2) tree, amphibian, and bat species richness, and is one of the richest spots in the world for birds and mammals at local scales as well. A species of bat, Lophostoma Yasuni, is endemic to the park.

However, Yasuni National Park is threatened by oil extraction and the colonization, deforestation, illegal logging and unsustainable hunting that has been made easier with the arrival of oil-access routes.

After reading all the information about the Ecuadorian Amazon Rainforest, it is now time to check out our tours!